AN INTERVIEW WITH BRENDON ROTHFUSS

Webster resident Brendon Rothfuss recently committed to play for the Golden Eagles. He played for the Syracuse Stars JR A team this past season in which he amassed 15 points in 33 games. Rothfuss has a history of being a winning hockey player, including one season in which the Democrat and Chronicle selected him as a local high school player of the year.
I asked Brendon a few questions so the players and fans can get to know him.... 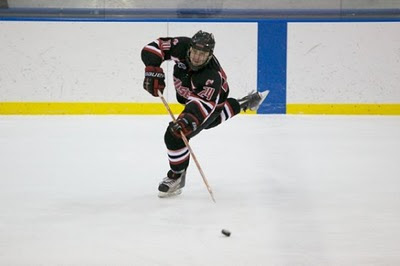 
When I was growing up my dad had season tickets to the Amerks games so I've been around hockey since the day I was born. When I was real young I remember going to the games wearing my Jody Gage #9 jersey with my old Cooper bucket on and knee hockey stick in hand, I was a hockey nut. Then, with a little push from my uncle and cousins, my parents signed me up for hockey at the age of 2. Ever since I was a little kid it was just hockey all the time.

I made my first AAA team with Rochester Youth at the age of 6 years old and was on that team all the way from mite minor to midget major where I got to play under former captain of the Pittsburgh Penguins Dan Frawley for a good chunk of my career.

I played my high school hockey with Webster Thomas in section 5 and following my senior year my coach (former Brockport assistant Dave Evans) sat me down and started asking me if I wanted to further my hockey career and play juniors. Up to that point I was pretty much set on taking a scholarship to play lacrosse in college. Coach Evans has had a significant impact on me not only on the ice but off the ice as well and without him talking to me about junior hockey I would not be where I am today.

Following high school I played 3 years of juniors with the Brockville Braves of the CJHL, Maksymum of the Empire, and the Syracuse Stars of the EJHL. I also owe a lot to Tony Maksymiu of Maksymum Hockey and now the Rochester Stars. I had the privilege to win a state championship in midgets and play juniors for him. As a coach he showed a lot of confidence in me which helped me out a ton as a hockey player.


Brockport's program has turned around in recent seasons, becoming quite successful. What do you bring to the team that will help maintain those winning ways?

Well, being a former defenseman I think that my defense-first mentality and for me to get pucks to the net and create opportunities will hopefully benefit the team next season.


What was it about Brockport that you found so attractive as both a hockey player and a student?

As a hockey player, the coaches are first class guys and have the program headed in the right direction, the atmosphere at home games in unreal, and Al Liwush -- who has been like a big brother to me since high school -- has had nothing but good things to say about the guys and the hockey program. And as a student its just a perfect fit for me, it's not an overly huge school, and I'm going to get a great education in the area I'd like to study.


What degree will you be pursuing in the classroom?


Who are your all-time favorite NHL-ers?

I'd have to say Wayne Gretzky, Alex Ovechkin and recently I've become a pretty big fan of Marion Gaborik.

A few years ago, while in high school, you were selected as a Section V hockey Player of the Year and you were the winner of the Pugliese Sportsmanship Award. Tell us about that magical season...


That year my high school coach Dave Evans really pushed me in the weight room in the off season, always telling me that I could do better, and before the season he and I sat down together and set goals for myself and the team. My personal goal was to get player of the year for our division but what I really wanted was a to help my team win our first sectional championship. The team that year was unlike any other team I've played for, we were more of a family than a hockey team. As a team, we got rolling and points and wins started to pile up. Coming down to the end of the year I was so concerned about winning that points weren't even on my mind which I think helped me out. Unfortunately, we didn't win a sectional title that year but it was definitely an honor to be selected as section 5 player of the year and it is something I will remember for the rest of my life, I had a lot of fun playing for my school and I am looking forward to doing the same at Brockport.