AN INTERVIEW WITH MATT DELUCA 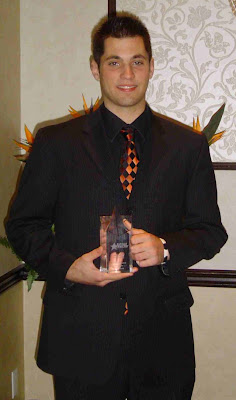 The Golden Eagles recently made a nice pick-up with the addition of Matt DeLuca a 6', 190-pound blueliner who excels in defensive play, a must-have in the powerful SUNYAC.

Matt spent last season with the Syracuse Stars of the EJHL and is a hardworking hockey player who will fit in quite well with Brockport's approach to the game.

I asked Matt a few questions about hockey and Brockport so players, fans, and alumni can get to know the new defenseman...


Well, I didn’t really start playing ice hockey until a little later than most college hockey players probably did. But, I think as a kid that actually helped me because I was always just dreaming about playing hockey and every day I wanted it more and more. I have seen a lot of kids get burned out from being too involved at a young age and by getting a late start. I feel like I overcame that obstacle.

I played midget hockey locally for the Junior Flyers where I met my previous Coach, Dave Dorman. He really took me out of 16U and into Juniors and started to shape me into the player I am today. After that, I played for him in the Metropolitan Junior Hockey League and then Atlantic Junior Hockey League. I really worked hard every single day and was fortunate enough to be an all-star both years, as a rookie.

Then, I left the Junior Flyers and went to the Syracuse Stars in the Eastern Junior Hockey League. The Stars have always been an impressive organization and playing well for them was very important to me. With that being said, playing for the Stars landed me at Brockport and I plan to continue to work hard consistently and try to bring as much positive attention to the program as I can.


Brockport has been a very good defensive team in recent seasons. What do you bring to the team that will keep up that tradition?

First and foremost, I was always taught that defense comes first and I don’t really plan to ever deviate from that strategy. Coming up through Juniors, in 2008, I was named the defensive defenseman of the year for the entire league and that’s something I have always taken pride in. In more recent years I feel like I have definitely started to focus more on being an offensive threat but like I said, I won’t ever deviate from focusing on defense first.


What was it about Brockport that you found so attractive as both a hockey player and a student?

I wanted to go somewhere that had a pretty good fan base established and to be honest I just got a really good impression of the hockey environment when I came to watch my first came in the Tuttle. As far as the academic environment, I really liked the atmosphere while walking around campus but I feel as if I’ll become more acquainted with the “college” aspects of Brockport when I arrive in the fall.


What degree will you be pursuing in the classroom?


Who are your all-time favorite NHL-ers?


My favorite player is Dion Phaneuf but being from Philly I have to mention Mike Richards.