The New York Bobcats of the AJHL have announced the following... 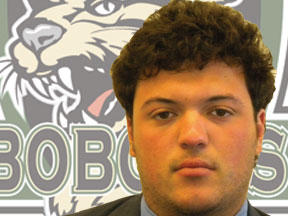 The Bobcats are proud to announce that standout goaltender, Joe Reagan, has committed to the Golden Eagles of Brockport State College for the 2010/2011 season. Joe will be joining former Bobcats Thomas and Danny Galiani, both of whom have contributed greatly to Brockport’s success this season. Brockport is a member of the SUNYAC Conference, which is arguably the strongest Division III Conference in the United States. Joe becomes the sixth player from this year’s New York Bobcats to receive a commitment to play collegiate hockey.

A strong argument could be made that Joe Reagan has been the Bobcats’ most valuable player the past two seasons. During his initial campaign last season, he played 40 games, posting a 22-10-2-1 record with a goals against average of 2.45 and an eye-popping save percentage of .928. He was one of the key contributors on a Bobcats team that finished second overall in the AJHL and ultimately participated in the U.S. Nationals. For long stretches of the season, his leadership and goaltending essentially carried the team. To no-one’s surprise, Joe has brought his game to an even greater level this season. Having recently clinched the AJHL regular season title and an automatic bid to the U.S. Nationals, the Bobcats owe much of that success to Joe Reagan. Through 34 games played this season, Joe has accumulated a 24-6-0-0-1 record with a goals against average of 2.32 and an outstanding save percentage of .929, placing him among the top five goaltenders in the AJHL. Together with rookie Sal Magliocco, the Bobcats have sported one of the top goaltending tandems in the league. Joe’s contributions to the team, however, go well beyond stopping the puck. As one of the most well liked and respected players on the team, Joe’s leadership has brought an attitude and air of competitiveness that invariably translates into success. More importantly, those qualities have permeated the Bobcats locker room on a day-to-day basis throughout the last two seasons. Ultimately, those intangible contributions have been as equally important as Joe’s on ice success.

Before joining the Bobcats, Joe was a member of the Long Island Royals 2008 Junior B National Champions. His contributions to that team were unsurpassed. In addition to earning MJHL All-Star and First Team All-League honors, Joe was the recipient of the league’s MVP and Goaltender of the Year awards. His extraordinary save percentage of .951 was by far the best in the league during the 07/08 campaign. In addition, to participating in the NYS Select 14, 16 & 17 Camps, Joe was selected for the USA National 14 Festival in 2004, where he accumulated the best goals against average of any goaltender in the country. Joe was also a two-time medal winner for Hudson Valley at the Empire State Games, earning a Bronze in 2007 and a Silver in 2006, and was the top goaltender on the Long Island Royals Bantam team that won the 2005 New York State Tier I Championship and reached the National quarter-finals. Joe is also well known for his storied high school career. Some of his many accomplishments while at Stepinac High School in White Plains included First Team All-League and Varsity Goalie of the Year honors in 07/08.

A strong and perennial honor student, Joe hopes to pursue a career in Forensic Science. The Bobcats would like to extend their sincere and heartfelt congratulations to Joe (or the “Bear” as he is affectionately called) and the entire Reagan family and wishes him the very best as he heads to Brockport State College to embark on his academic and college hockey career.