GERSHON SKATING WITH THE CHIEFS

Mike Gershon, Brockport's award-winning defenseman, is skating with the Johnstown Chiefs of the ECHL this week.

Coming off a season which saw him take second-team honors in SUNYAC while netting a hat trick amongst his 17 points, Gershon and his physical and electric play will be a great addition to the team if they sign him. 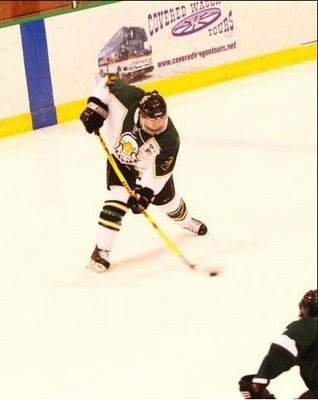 Mike arrived in Johnstown yesterday and is hoping to get into some games this weekend in Elmira. Mike said that this is more of a look for next year. Later in the week he'll provide us an update.

We wish Mike the best of luck. This is a huge opportunity for him.

For those unfamiliar with the levels of pro hockey in the US, wikipedia sums up the ECHL as:

The ECHL (formerly the East Coast Hockey League) is a mid-level professional ice hockey league based in Princeton, New Jersey, with teams scattered across the United States and Canada, generally regarded as a tier below the American Hockey League. The ECHL's official website lists the league as "The Premier AA" league of hockey in North America, because most teams serve as feeder teams for American Hockey League teams.

The ECHL, along with the AHL, are the only minor leagues recognized by the collective bargaining agreement between the National Hockey League and the National Hockey League Players' Association, meaning that any player that is signed to an entry-level NHL contract and is designated for assignment, must report to a club either in the AHL or the ECHL.