From the North Country's newspaper..... 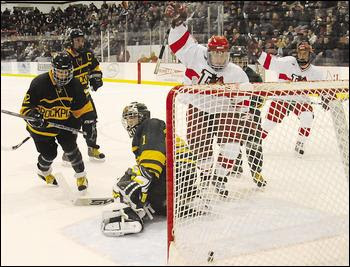 The Plattsburgh State men's hockey team will gladly take the two points in the standings.

The top-ranked Cardinals, however, weren't at their best Friday night in a 4-2 State University of New York Athletic Conference win over Brockport at the Stafford Ice Arena.

"It wasn't a fun game to coach," said Plattsburgh State head coach Bob Emery. "I give Brockport credit — they worked hard. Brockport played fast and forced us into making mistakes."

Defenseman Ryan Corry sent a slapshot from straight on into the net past Brockport goaltender Oliver Wren to give the Plattsburgh State the lead for good, at 14:46 of the first period.

Then, at 18:18, Wren knocked down Nick Rolls' slapshot, but Riley Hill tucked in the rebound for the power-play goal and a 2-0 Cardinal lead.

But, with 14 seconds left in the first, Sean O'Malley took Chris Berardini's pass following a Plattsburgh State turnover and put the Golden Knights on the board.

"We were playing pretty well at the time and should have taken a 2-0 lead into the lockerroom," said Emery."But, if we wouldn't have won the game tonight, that would have been the game changer. We can't afford to give up goals that late in the period, and we need to play smarter."

The Cardinals, however, regained their two-goal lead just 2:11 into the second period on the powerplay. Rolls sent a slapshot over Wren's shoulder and into the net.

Brockport, skating on a five-on-three, rallied back to within one, at 3-2, at the 15:52 mark. Plattsburgh State goaltender Bryan Hince made a couple of saves, but Ray Tremblay put in the rebound from in close.

It stayed a one-goal game until 16:19 of the third. Wren stopped Dylan Clarke's shot only to have Kyle Kudroch backhand a rebound into the net for an insurance marker.

"Hopefully, this game will be a wake-up call for us," Emery said.