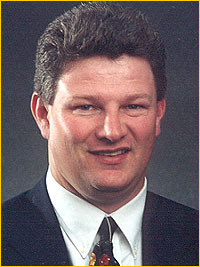 Brian not only became the first Brockport hockey coach to surpass the century mark, but earlier this year he assumed the #1 spot in coaching victories, besting the 93 that Bob Pedersen had as the varsity coach.

With the team performing as well as it is, there's a very good chance he'll receive his third SUNYAC Coach of the Year award this season. He deserves it!