I was glossing through the national statistics for the NCAA Division III and noticed that Todd Sheridan is up there near the top in the most important goaltending stat -- saves percentage. Currently, his .935 has him ranked eleventh. 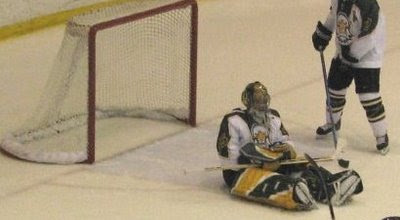 But, that merits a closer look. Let's compare apples to apples. The leader has seen only 34 shots on goal and others in the top ten have seen no more than 40...meaning that they're on the leader board with only one game, maybe two, of work.

Now, if you look only at goaltenders who have seen at least 100 shots (and there are many) like Todd has (168 so far) he ranks second in the nation, behind Justin Marriott of Wentworth and his .941.