BROCKPORT GOES DOWN 3-2 AT HOBART

I was unable make it to the Hobart game, and the same holds true for tonight's game at Morrisville, but I listened to the game on WBSU and it was as exciting and close a game as I thought it would be. Had it not been for questionable call, the Golden Eagles could have walked away with a tie. Here's what the Brockport Athletic Department reports....

Questionable Call the Difference for Hockey against Hobart 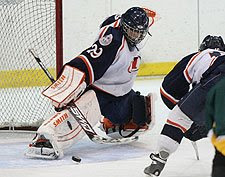 (Sparta, NJ) and Lucas Schott (Erin, ONT) each scored goals for the College at Brockport Men’s Hockey team but a questionable call by one of the referees in the second period gave Hobart College the second of three goals as the Statesmen defeated Brockport 3-2 Friday night in Geneva.

Hobart (3-1) took a 1-0 lead four minutes into the contest but Brockport (1-1) bounced back to tie the score nine minutes later with a goal by Schott that was set up by juniors Jason Gorrie (Etobicoke, ONT) and Sean O’Malley (Lakewood, OH).

In the second period, Hobart’s Jason Merritt skated into the Brockport zone along the right side of the ice and fired a long shot at the Brockport goal. Freshman goalie Oliver Wren (Oakville ONT) covered the puck up after it the shot had caromed off the post but the referee signaled for a goal even though the goal judge had not turned on his light. The controversial goal gave Hobart a 2-1 lead with 13 minutes to play in the second period.

Two minutes later, Hobart made it a 3-1 lead before Gershon scored late in the period to cut the lead to 3-2. Gershon’s goal was assisted by sophomores Ryan Silveira (Brampton, ONT) and Ray Tremblay (Peachland, BC).

In the third period, Brockport controlled the play for the majority of the final 20 minutes with a 16-7 advantage in shots in the period. The Golden Eagles had a few scoring chances late in the period including an O’Malley shot that hit the post with less than two minutes to play and a Tom Galiani (Lindenhurst, NY) shot that was deflected by a Hobart defenseman with less than 15 seconds remaining.

Wren made 31 saves in his collegiate debut.