This isn't a Brockport or DIII item, but it's good hockey stuff nonetheless. Check out this story from the Buffalo News....and vote for this young lad! 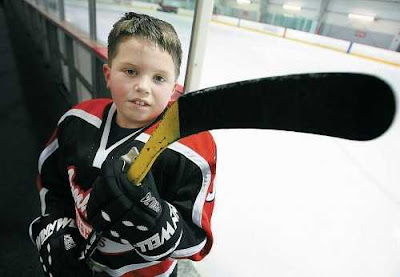 For a “regular” kid, 7-year-old Derek Andrews of Clarence does some extraordinary things.

Struggling with a mystery ailment that is attacking his muscles, Derek nonetheless is a star at baseball — his favorite activity — hockey and soccer, and did great things for sick children and the Buffalo Zoo with money he won in a local contest. Perhaps that’s why Derek is one of six finalists in Sports Illustrated Kids magazine’s “Sports Kid of the Year” contest — and today learns if he has made it to the top four. His chances are good: In a contest that started with some 5,500 kids, he was the top vote-getter for most of the past week.

“He’s a wonderful person,” said Susan Corrie, the principal at Harris Hill Elementary School, where Derek is a third-grader.

Tricia Andrews, Derek’s mom, said the family entered him in the contest almost on a whim. Her husband heard about it from a friend and decided to enter. The couple were surprised when they learned their son had made the initial cut. As in “American Idol,” whichever contestant gets the most votes wins the magazine’s contest. Voting for the current round ends today at noon. If Derek makes the cut, as expected, voting continues until next Monday, when the top two vote-getters will be announced. The winner will be announced Oct. 13.

Votes can be cast by logging on to www.sikids.com

Derek has been under treatment since first grade for an undiagnosed ailment that is weakening his muscles. He undergoes physical therapy as often as four times a week and is now doing pool-based therapy. Doctors have not been able to determine what the ailment is, or what caused it. His parents are hanging tough, though, just like their son.

“I can’t say it’s getting better,” his mother said. “But it’s not getting worse.”

Despite his condition, Derek made his baseball league’s all-star team, won a spot on a hockey select team and was the leading scorer on his soccer team.

Not long ago, he won a Bank of Akron essay contest called “What I Would Do With a Million Dollars.” With his prize money — about $64 — he accomplished what he had promised to do in his essay, putting on a magic show for the youngsters at Women and Children’s Hospital of Buffalo and buying food as a welcome-home gift for elephants at the Buffalo Zoo that were returning from the Columbus Zoo in Ohio.

At this point, the Sports Illustrated competition is extremely tough. Derek is up against a 14-year-old girl from New York who won the Women’s Junior National Ski Jumping Championship last winter; a 10-year-old baseball, football and basketball player from Virginia; an 11-year-old Florida boy who hit 21 home runs this season; a 15-year-old female fencing champ who finished third at the Olympic Trials; and a 14- year-old boy from Iowa who is a Junior Olympics champion in track and field.

Derek is confident he will win. And he is unaffected by the tons of attention, especially from the media, he has received as he has made his way up the list, beating out some 5,500 contestants.
How does he feel about his success in the contest so far?

What is his favorite thing? “Hockey.”

He also enjoys math, which he likes because — just like the sports he plays — “it’s a little hard.”

Derek wants to be either a baseball player or an astronaut when he grows up. Derek turns 8 Saturday.

What does he want for his birthday?

“To win the contest,” he said.

Oh yeah: and some Legos and a chocolate birthday cake.